Today, February 25th, marks the day that the newest mid-range GeForce gaming GPU from Nvidia is supposed to be released on the market and both crypto miners and gamers are eagerly anticipating this release. The release of the Nvidia GeForce RTX 3060 GPU with 12GB of GDDR6 video memory is definitely an interesting event, but should gamers and miners be so enthusiastic about the new model? Well, neither gamers, nor miners will most likely be so happy after what they will see today - you can expect to see high prices and limited availability and the main reason for that is Ethereum mining of course.

Up until very recently crypto miners were expecting the new GeForce RTX 3060 GPU to be the next big thing in mining and more specifically in Ethereum (ETH) mining as the latest crypto mining craze is focused there. The GeForce RTX 3060 was supposed to be delivering around 40 MH/s mining hashrate at stock settings and up to about 45 MH/s hashrate after some tweaking… and it does manage to deliver that, but there is also a catch. Nvidia has decided to enforce hashrate limitation for the RTX 3060 via their video drivers in order to drive away miners and have the GPU available to gamers. So, instead of 40–45 MH/s hashrate for Ethereum mining users will be getting just around half of that at 20–22 MH/s and that is definitely not as attractive for such a high-priced video card.

What Nvidia did wrong here is announcing this software-enforced hashrate reduction in half just a few days before they release the new GeForce RTX 3060 GPU and that did not have a positive effect for sure. Most crypto miners still may not be aware of the reduced hashrate for Ethereum and a lot of them have already ordered the new GPU for building mining rigs with it. And because of the high interest from miners the prices are high and availability still a problem, so gamers are once more not too happy that they cannot get their hands on the new video cards or if they can the price is artificially inflated because of the miners’ interest in it.

Nvidia should have announced their plans much earlier than they did, so that miners will be well aware of that by the release on the market and will not bother buying these GPUs and thus the price and availability could’ve been much better for gamers. Now, crypto miners will be buying RTX 3060 GPUs in bulk at high price just to find out that their actual performance for Ethereum mining really sucks and is only half of what they expected and they will feel cheated. As a result, these GPUs will most likely be finding their way back to distributors and retailers and these companies will have hard time selling them to gamers due to the high initial price they got their stock at expecting miners to buy it.

It is not all lost for miners that got their hands on the new GeForce RTX 3060 GPU expecting high Ethereum mining hahsrate. No, you will not be able to get 40–45 MH/s mining Ethereum with these for now, unless a workaround is quickly discovered, if possible at all. Furthermore, the limitation extends not only to the most popular for mining Ethereum, it covers the whole Ethash algorithm that ETH among other crypto coins also use. Not to mention that the artificial limitation for the half performance of the actual one is not bound to a specific coin or algorithm such as Ethereum or Ethash. In fact, may if not all memory-intensive algorithms that have a way of working similar to that of Ethash used by Ethereum could also be affected as Nvidia uses an algorithm to detect a specific behaviour for the GPU to know if it is mining or not. 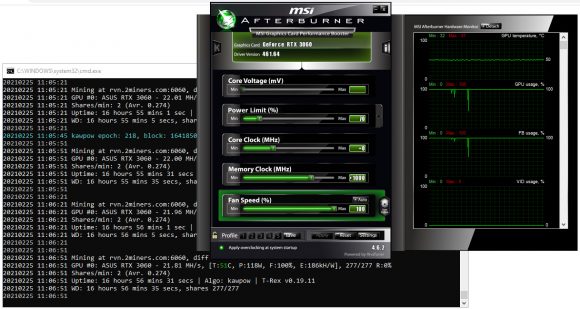 It is already known that VertCoin (VTC) and its VertHash crypto algorithm is also affected and you will be getting similar drop in performance with the RTX 3060 GPU. It is not all lost however as RavenCoin (RVN) for instance does work normally for mining on the RTX 3060 and manages to deliver a good performance with over 20 MH/s hashrate with power optimized settings and with a bit of overclocking even around 22 MH/s with just 120W of power usage. Mining other crypto coins that use GPU-intensive Proof of Work mining algorithms will also most likely be problem free as far as getting the actual performance the RTX 3060 is capable of instead of the artificially reduced hashrate to half of what it is supposed to be.

There are some other currently profitable crypto coins available for mining that might be doing quite well on the new RTX 3060 GPU, besides Ravencoin and its KAWPOW algorithm of course. You should check out crypto coins that use algorithms like MTP, CuckooCycle, Cucatoo31, Cucatoo32, Cucatoo29s, Zhash, ProgPow, ZelHash, EquihashZero, ProgPowZ, BeamHashIII, X25X and others. That of course would need some testing first, but there is a good potential to still maximizing the performance that the GeForce RTX 3060 has for crypto mining even when you take out Ethereum from the picture. A lot of people however will probably not even bother trying out something different than mining Ethereum, especially people new to crypto mining that know only of Ethereum mining as a profitable thing to do.

You can never say that crypto and crypto mining is a boring thing to do, especially if you are not one of those people that just want the easiest way around in making money mining and are not really interested in cryptocurrencies… If you are reading this now, then you most likely aren’t one of these people anyway.

– More on the Limited Mining Hashrate of the GeForce RTX 3060…